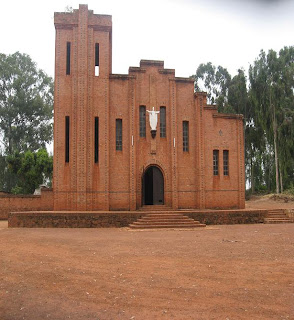 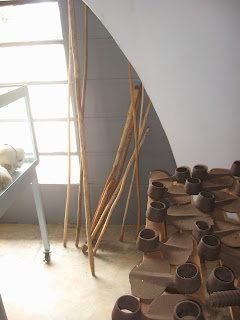 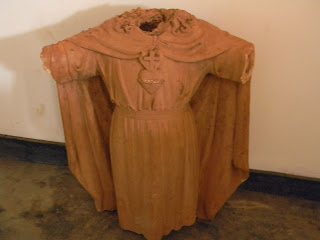 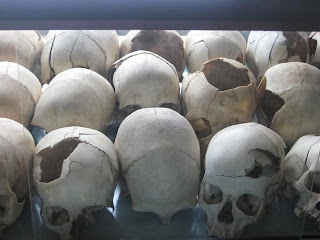 Finally, the guide took us to the site of the mass memorial graves.  They are perched on the side of the mountain, overlooking beautiful valleys filled with banana plantations.  The mass memorial graves are divided into two parts: those individuals whose identities are known are on one side, and those who are unknown are on another.   The unknown persons' side is larger, given that people came from all around the area to find safety in the church.
A group of curious local children had come out, shyly, to watch us as we walked through the memorial site.  Some people on our trip had a few soccer balls so they gave them out.  Linda and I brought lollies so we gave them to one of the genocide guides, and she had the children line up in an orderly fashion and she handed them out.
The drive out of Nyarubuye was a little strange: this is a group of teachers.  Teachers are highly verbal: they talk a lot.  Some would say they talk too much.  Usually our bus was very noisy with the sound of twenty teachers talking.   The bus was silent as we drove away from the church at Nyarubuye.
Posted by Lisa Turner at 10:05 AM